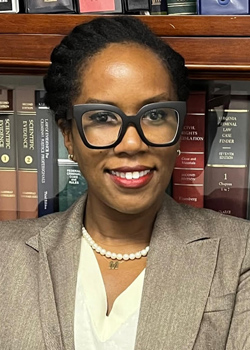 Attorney Jerri Fuller began practicing law in 2006. A native of Virginia, Jerri has had the privilege of litigating cases throughout the Commonwealth, from multiple courts in South Hampton Roads to as far north as Warrenton. She maintains a varied practice, handling the lowest level traffic infractions to Class 1 criminal felonies.

Jerri represents clients at every phase of the criminal justice process, from pre-charge investigation and negotiations to bench or jury trials. A tireless advocate in the defense of her clients, Jerri works alongside doctors, forensic specialists, and other experts to secure the best possible outcomes for her clients. Jerri is also an avid researcher and writer and has authored several appellate briefs that were argued before the Virginia Court of Appeals. She prides herself on a holistic, wellness-centered approach that prioritizes the emotional and mental health of her clients at all parts of their decision-making process.

Jerri enjoys challenging cases that present complex issues of law and fact. In her spare time, Jerri volunteers as a tutor for several youth programs in Washington, D.C.