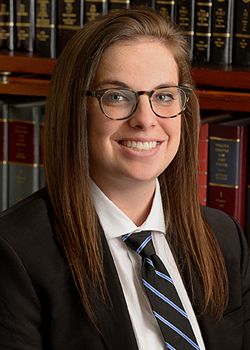 Attorney Jessica A. Richardson was born in Henrico County, Virginia and raised in Goochland County, Virginia. She attended George Mason University, and in 2012 graduated Magna Cum Laude with a degree in Criminology, with a concentration in Law and Society. During her undergraduate career, Jessica focused on the study of law. She was also involved in several internships. She worked for the Victim Witness Assistance Program, a part of the Commonwealth Attorney’s Office in Manassas, Virginia, where she helped others feel prepared and educated on the criminal justice system, as they were involuntarily swept into it. She also worked for former U.S. Attorney General, Eric Holder, at the Department of Justice, where she attended Congressional Hearings, and had exclusive control of confidential documents. In spite of the demands of being a full-time student and a full-time intern, Jessica graduated from her undergraduate institution a full year early.

In 2012, directly after graduating from George Mason University, Jessica moved to Michigan in pursuit of a law degree at Michigan State University, College of Law. While attending law school, Jessica interned at Fenton Legal Services, in Fenton, Michigan. There she attended court and dealt with various family law issues. She then interned at the Rutherford Institute, in Charlottesville, Virginia, a nonprofit civil liberties organization that is deeply committed to protecting the constitutional freedoms of every American. Although she enjoyed her time doing family law work, this internship solidified her belief that she was destined to practice criminal defense law.

Jessica A. Richardson has spent the entirety of her legal career in the practice of criminal law, and as an associate of Patrick N. Anderson & Associates, P.C.  She believes wholeheartedly in the U.S. Constitution and works daily to ensure that individual rights are protected, specifically the right to be declared innocent until proven guilty.